Understanding the Different Types of Cataracts 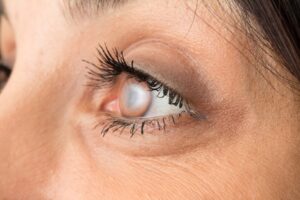 Not all cataracts are created equally. The team at Mack Eye Center is available to help determine which type of cataracts you have, as well as offer guidance on how best to treat these cataracts.

Most people who develop cataracts suffer from the nuclear sclerotic variety. An ironic aspect of this type of cataract is that it usually temporarily improves your vision. At first the cataract will enhance your ability to see close up objects in a phenomenon known as second sight, but in the long run your sight will get significantly worse.

The word “nuclear” refers to the fact that these cataracts form at the center of the lens. There, the lens gets thicker and gradually changes color — yellowing and ultimately becoming grayish once it is most severe. In another act of irony, your own ability to differentiate between colors decreases as your own eye changes color.

Conversely, cortical cataracts affect the outer layer of the lens. Over time, however, the white cloudiness will expand inward to the eye’s nucleus, impeding light from coming through the lens. Symptoms include blurry lines and overall blurry vision, and though glasses can improve your vision with these cataracts in their earlier stages, it will later require more significant treatment.

This type of cataract creates haziness at the back of the lens, which is where light enters the eye. Consequently, posterior subcapsular cataracts have a negative impact on your ability to read and see at night. You may notice halos form around the lights you see at night.

While the aforementioned types of cataracts take years to develop, posterior subcapsular cataracts form at an accelerated pace, doing full damage within a matter of months.

While cataracts most commonly develop as you age, there are some children who have cataracts at birth. Depending on the severity of the cataracts, the doctor may opt to perform cataract surgery at a young age to ensure that a child can see properly, though there are some congenital cataracts that pose no adverse effects and require no treatment.

Meet with the Doctors

Thankfully, there is no reason to endure the worst effects of cataracts, as there are surgical solutions for each type. The team at Mack Eye Center is happy to consult with you about your cataracts to come up with the best course of treatment to keep you seeing as normally as possible, so email for an appointment today!